Feature Article - The Power Of Advocacy

The RVVAC (River Valley Veterans Advocacy Council) is a group of Veterans and representatives of area resources who advocate for Veterans needing assistance in problem-solving VA and non-VA related issues. We started a bimonthly coffee gathering (“Cup O' G.I. Joe”) as a place for Vets to shoot the breeze. Sometimes a Vet mentions an issue he or she is having trouble resolving, and I'm given the chance to make a magic phone call to get info the Vet can use. Occasionally, it involves a little more. Such was the case with Bill, a Vet who was encouraged to attend a “Cup O' Joe” by his counseling intern, Alaine, and his nurse, Mary-Lynn at the River Valley Integrated Health Center, which serves area Veterans. “Cup O' Joe” is where I met Bill. What follows is the update I read to the RVVAC members, to illustrate what a difference we can make when we advocate for our Veterans: 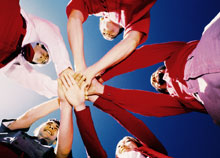 I'd like to thank Mary Lynn, RN, for her outstanding advocacy efforts on behalf of one of our "regular" clinic Vets, who passed away on 6/15/2011 in Tomah.

While I know she will just tell you that it was her job, or "That's what nurses do", she has the right to know what I know: that she went above and beyond the call of duty for this Veteran. Bill didn't really want to be in "therapy", and sometimes didn't take his medications. He isolated himself, rejected his family because he was sure they rejected him, and was a very lonely man. Bill was terminally ill, in denial, refused offers of assistance, and was sure he was going to die unworthy and alone. He had no reason to expect otherwise; his childhood was the thing of nightmares, and he dealt with his adult world in kind.

He enjoyed coming in to the clinic to see Alaine, who deserves kudos for the wise seeds she planted, which sprouted after his therapy had concluded, but just in time for him to use them. A miracle.

Bill's visits to Mary Lynn and Alaine were his sole social outings. He later told me that Mary Lynn would "kick his butt" if he didn't take his meds, and he liked it! With the support of Alaine and Mary Lynn, another miracle occurred and our Vet showed up for one of our "Cup O' G.I. Joe" coffee/breakfasts with his oxygen tank in tow. He soon began to see that other people liked him! He was our "regular"--I could always count on him to be there, and I asked him to be my "Second-in-Command".

The simple coffee gatherings gave Bill the confidence to get out and do other things, which he quickly took a shine to!

Meanwhile, Mary Lynn, using her well-honed skills of persuasion, encouraged Bill to get in contact with his family. He faced his anxiety, and visited with his daughter via Skype in Mary Lynn's office. She was glad to hear from her dad! Another miracle. 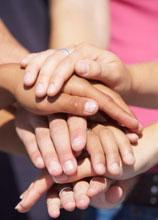 A framework of caring folks began to connect to help this crusty Vet who suddenly wanted so much to live before he died. Mary Lynn, Alaine, Bill's apartment manager, a pastor whom Bill knew, Bill's daughter, sister, and niece all joined hands with me to care and advocate for Bill as he got weaker. Our “Circle” was involved in the most minute daily goings-on to be sure Bill had what he needed, and my evenings were often spent on the phone, keeping the people in the Circle informed, and orchestrating a bit. Bill began to call his sister and daughter, who live out of state. Soon, a day did not pass that he wasn't on his phone, communicating. Another miracle.

Bill began to talk with me about his fear of dying, and in talking about it, began to accept that his journey here was coming to a close. Mostly, Bill spoke with wonder and gratitude that people cared about him enough to help him, and that his family still loved him. He wept, regretting that it took him so long to figure that out.

Thanks to Mary Lynn, all of Bill's medical needs at home were seen to. His apartment manager checked on him frequently, and his sister visited him. He was very concerned about his best buddy, a meek lady cat named Midnight. I assured Bill that her care, temporary or permanent was arranged for with loving foster parents, Amber and Lance, who had never met Bill, or Midnight.

Bill was fading fast, and soon could no longer live alone. It broke his heart to consider giving up his little apartment and his independence. He knew that if he left, he was never coming back. Mary Lynn found a very cool spot at the VA in Tomah, Wisconsin for him, and she drove him there herself. He told me that he would never have agreed to "try" the hospice-type arrangement without Mary Lynn's reassurance, (and a miracle).

Bill quickly got used to his new digs and the great staff. As he rested there, Bill realized that he'd received redemption and forgiveness; he was loved and liked by others, and he was no longer alone. He received a visit from his niece and grandnephew whom he hadn't seen for many years. A miracle.

The final miracle was that when Bill died six days later, he died quietly, and at peace. The sum total of his life was positive--because people had cared for him, and had advocated for him.

You can call it hard work, a caring attitude, “just doing your job”, helping a Veteran, or whatever you like. To me, this series of events, involving a dozen people and more, were nothing less than miracles.

Never doubt that miracles can be wrought when humanity and advocacy are combined. And I was wrong: the final miracle was the gift Bill gave to the people who held him in their Circle. People who weren't expecting a thing. You can't beat that.

Submitted in memory of my friend, Bill, who agreed to allow me to pay when we went to Red Lobster and then ordered--lobster.